Please print this and give to your staff. This will help you sell more diamonds.

What Makes Some Diamonds Glow?

An intriguing phenomenon of some diamonds is that they appear to glow blue, and less often green, yellow, orange, or a combination of these colors when exposed to invisible ultraviolet rays. This glow is called fluorescence, and lasts only as long as the diamond is exposed to the ultraviolet rays

In addition to color, fluorescence also varies by strength – from none, faint, medium, strong, and very strong, as described on GIA grading reports. The fluorescence color and its intensity are additional characteristics that can help to identify a specific diamond

A common feature of diamonds.

Fluorescence is a common phenomenon in diamond. Of all the diamonds submitted to GIA over the past decade, approximately 25% to 35% exhibit some degree of fluorescence. And of those, only 10% show strengths of fluorescence in the medium, strong, or very strong categories

GIA studies have shown that the strength of fluorescence has no widely noticeable effect on a colorless or near-colorless diamond’s appearance. In fact, many prefer the appearance of diamonds that have medium to strong fluorescence. In very rare cases (fewer than 0.2% of the fluorescent diamonds submitted to GIA), some diamonds with extremely strong blue fluorescence may appear hazy or oily.

No impact on a diamond's strength.

The presence of nitrogen or other impurity atoms in the diamond crystal structure does not have any influence on the hardness or durability of a diamond. 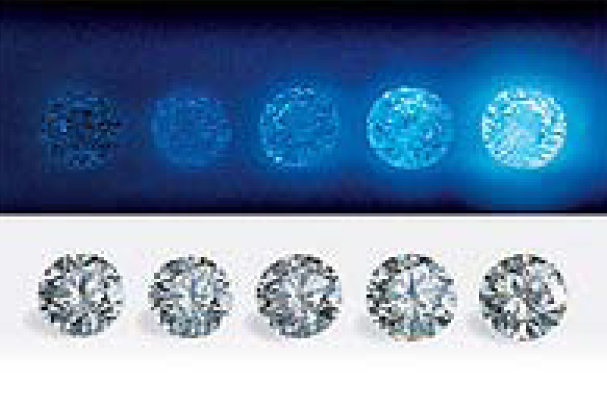 CARLSBAD, Calif. – July 6, 2009 – In an effort to help educate the public about the common, but little understood, phenomenon of ultraviolet fluorescence in diamonds, the Gemological Institute of America (GIA) will include, effective immediately, additional information describing fluorescence and its properties in every GIA Diamond Grading Report and Diamond Dossier® that carries a diamond fluorescence description of medium or stronger.

A separate, four-color insert addresses the most frequently asked questions about fluorescence, explains its properties in easy-to-understand terms, and includes comparison images of diamonds in both natural and UV light to illustrate varying intensities of fluorescence. “Some diamonds show fluorescence and some don’t,” said Thomas M. Moses, GIA’s senior vice president of Laboratory and Research. “Fluorescence is the emission of visible light by a diamond when it is stimulated by invisible ultraviolet (UV) rays. It is a common characteristic of diamonds. The diamond simply glows under the UV lights, usually a blue color, which most often stops when the energy source causing it is removed.”

For more than 50 years, GIA has indicated the presence of diamond fluorescence on its diamond grading reports, but described it on the report as an identification characteristic only – not a grade, Moses said. The five terms GIA uses to classify the intensity of the fluorescence are: None, Faint, Medium, Strong, and Very Strong. “This insert will help the public better understand diamonds in general, which gives them more confidence and knowledge when making a decision about a diamond,” he said.

GIA has additional information on fluorescence on its Web site, including a scientific article, “A Contribution to Understanding Blue Fluorescence on the Appearance of Diamonds,” by Thomas M. Moses, Ilene M. Reinitz, Mary L. Johnson, John M. King and James E. Shigley, which appeared in the Winter 1997 issue of GIA’s Gems & Gemology.